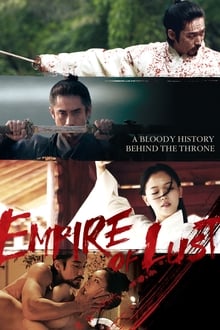 Ahn Sang-hoon, the well-known director who created Blind, has recently announced one more amazing movie “Empire of Lust” with an amazing combination of romance and struggle that proved its edge among the audience in Korea. As indicated by the name; this movie is mainly focused on a sexually frank affair that ultimately turns out into a battle between three legends Shin Ha-Kyun, Kang Ha-neul and Jang Hyuk. The intense scenes of sex and romance are floated by betrayals, plotting and bodice-ripping in the whole story.

The movie represents the 14th century; the early days of the Joseon Dynasty and the main focus, in the beginning, is upon King Taejo. The king is finding it hard to make a decision about his successor as the Crown Price Yi Bang-Won has already been rejected from this position. In order to save the clan from foreign invasion, all the private armies and bodyguards are joined to the national force under one commander Kim Min Jae. With time, Kim falls in love with a beautiful giseang woman Ka Hee, and the leading trust towards this lady became a reason of displeasure for his wife. In between; Kim’s son also caused some trouble in his position while spending most of his time chasing a woman.

Viewers that are excited to enjoy the typical Korean period dramas on the screen will definitely love this movie. This well-made romantic, yet bloody genre is also available online, and you can stream it from any corner of the world to enjoy the amazing story. This film has a deep concern with the civil unrest, and the director has brought it to the viewers with a perfect combination of historical accuracy, entertainment, romance and stunning narratives. The political and military concerns are highlighted in a unique way with an intelligent script.

The story doesn’t end with a love frame; rather it shifts to a mystery with Ka Hee’s intentions to take revenge. The melodramatic direction of Ahn has brought Kim and Ka Hee into center stage in the whole story; but it doesn’t mean that you will not be able to realize the potential of other two major roles: Kang Han Na and Shin Ha Kyun. Some genres of sex and nudity are also shot in the storyline in a very tasteful manner. The story also turns out to be violent at times with a softer edge on the other side.

After enjoying movie streaming online, viewers will realize that Ahn has made the best use of a substantial budget to bring this Korean drama on screen. The strong visuals, amazing narrations and stunning costumes will never let you notice any shortcomings in the whole story. With all beautiful things added perfectly to this melodrama; Empire of Lust is one of the top-ranked movies in the list of Korean movies. It is worth to watch this movie on the upcoming weekend. You can go online and stream it from any corner of the world with top quality content. You will definitely appreciate the ultimate direction of Ahn in this movie.